It has come to our attention that on the 22 May 2014, Uber London Ltd moved to a new registered operating centre on the first floor of Focus Point, 21 Caledonian Road Islington, from the former Winchester House Old  Marylebone Road. 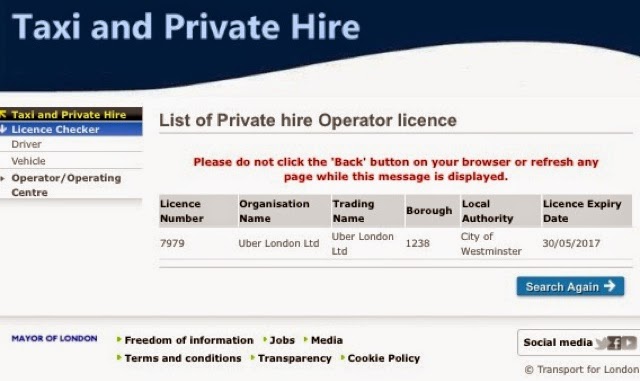 It would appear (referring to the TfL private hire checker) that Uber are licensed to operate from registered offices within the City of Westminster. After checking TfLs PH licence checker again, we found that Uber have no such licence to operate from within the London borough of Islington.
Either TfLs website is incorrect, or Uber hasn't submitted a PHV/106 variation application form.

The private hire act 1998
The legislation contained within the PH Act of 1998 is very clear on this issue. If A licensed PH company is operating from unlicensed premises, their licence should be immediately revoked (Private Hire Vehicles (London) Act 1998.s.16 and also the TfL staff manual  10.5)
The legislation does not say TfL should give them a period of time to sort the issue out, it clearly states their licence should be immediately revoked.
We have written to Sir a Peter Hendy outlining this complaint and due to the serious nature of this issue, we expected a swift reply.
As of today, we have received no reply.
Source:
http://companycheck.co.uk/company/08014782/UBER-LONDON-LIMITED#event-history

Posted by Editorial at 08:43 No comments:

Posted by Editorial at 07:47 No comments: