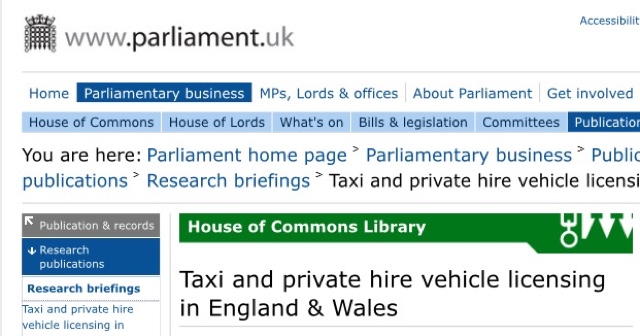 This paper sets out the licensing arrangements for taxis and private hire vehicles and their drivers and the enforcement of those licences. It also looks at some of the issues currently of concern to the industry and licensing authorities.
As taxi licensing is devolved in Scotland and Northern Ireland this paper only deals with England and Wales. Once the Wales Bill becomes law, licensing will also be devolved in Wales and this paper will be amended to cover England only.
The present law varies depending where one is. The licensing conditions that are applied to taxis and PHV drivers and the local conditions of vehicle fitness are for each local licensing authority to decide, so can vary considerably from area to area.
In England and Wales, outside London, taxis are licensed by district councils under the Town Police Clauses Act 1847or that Act as amended by the Local Government (Miscellaneous Provisions) Act 1976. All taxis and their drivers must be licensed. Private hire vehicles (PHVs), sometimes referred to as minicabs, drivers and operators are subject to licensing if a district council has adopted Part II of the 1976 Act (most have) or has similar provisions contained in a local Act.
In London, the taxi legislation dates back to the nineteenth century, but the main licence conditions are made under the London Cab Order 1934. The minicab trade in London is licensed by regulations made under the Private Hire Vehicles (London) Act 1998.
In Scotland taxis and PHVs are licensed under Part II of the Civic Government (Scotland) Act 1982, as amended. Licensing works in much the same way as in England and Wales.
In Northern Ireland taxis are licensed under the Taxis Act (Northern Ireland) 2008 and PHVs
The legal framework in England and Wales, including London, was reviewed in 2012-14 by the Law Commission, which published recommendations and a draft Bill in May 2014. The Government has yet to publish a response to this and indicate whether it intends to implement the wholesale reform proposed by the Commission. The Coalition Government made minor changes to the law in the Deregulation Act 2015. The Wales Bill includes proposals to devolve responsibility for taxi licensing in Wales.
Both the taxi and private hire industries are facing challenges from new technology, and from legislative change, causing concern and anger amongst a number of operators and drivers. This is a particular issue in London where Uber has been subject to legal challenge and its use by PHV drivers in London has proven deeply controversial.
The issue of quantity restrictions is dealt with in a separate note (SN2772). Information on other roads- and traffic-related issues can be found on the Roads Topical Page of the Parliament website.
Commons Briefing papers SN02005
Author: Louise Butcher
Topic: Roads
Download the full report
Taxi and private hire vehicle licensing in England & Wales (   PDF, 501.12 KB)
http://researchbriefings.files.parliament.uk/documents/SN02005/SN02005.pdf
Posted by Editorial at 14:43